Patriotism Killed Jesus Choosing the hope of the sword over the cross.

Imagine, if you will, a fictional scenario of a present day America where recent history turned out a little differently:

A few years ago the militant radical Islamic group, ISIS, started to gain the upper-hand against the American Military in the Middle East. Through strategic surprise attacks and allegiances with other various Muslim countries, the United States was caught off guard. Coordinated cyber attacks crippled our military defense systems, giving ISIS control of our missiles. Initially there was backlash, but after the first three American cities were bombed by our own missiles, the Government surrendered. The President was put to death along with most high Government officials. ISIS set up their own government over the nation of America and ruled it’s people with the ever looming threat of self-inflicted nuclear attacks.

Over the years many Americans learned to accept this new way of life, ruled by their enemies. Many found comfort in complying with their demands and some even allied with them, gaining a certain level of power. In order to maintain their control through fear, ISIS would often flex their muscles by rounding up random people and beheading them. As the years went by, more and more, it seemed like there was no hope. With these terrorist enemies holding the power to the most advanced military in the world, how could America ever have freedom again? Many Americans never let go of hope, after all, it had only been less than a decade that they were under occupation. These patriots remembered what freedom was like, and they were still willing to fight for it.

Rebel insurgencies formed over the years (freedom fighters who were willing to lay down their lives for the freedom of America). From time to time these groups would rise up and strike against the foreign occupiers, only to be beheaded and cause ISIS to execute more civilians. 30 years would pass, and while there were small victories at times, no significant ones. Patriotic Americans yearned for a war hero, a freedom fighter to lead the charge and take back their beloved country. Most were too afraid to stand up and fight, but everyone loved those that did.

This is the world that Jesus lived in. Though America was Israel and ISIS was Rome.

Israel was conquered by Rome, who ruled their land with terrorism and oppression. Israel was eagerly awaiting a patriotic freedom fighter to lead them to victory against their occupiers who ruled their God-given land. Who was brave enough to stand up and strike back against these occupiers and win their freedom? That was the burning question on Good Friday, two thousand years ago.

Who Lives and Who Dies?

Jesus lived in a world very similar to the fictional scenario described above. Israel boiled over with patriotic fervor; rebellions would take place frequently. If you killed Romans you were considered a hero. If you allied with them as a tax collector, you were considered the worst of scum.

After living almost thirty years under terrorist occupation, Jesus was arrested. After a brief interrogation by the local terrorist governor, Pontius Pilate, Jesus was sent back out among the Jews because Pilate found no fault in him. To quiet the crowd, stirred up by the Sadducee’s and Pharisees, Pilate resorted to a long-held Passover tradition to give the mob one last chance to free Jesus: a prisoner exchange.

All four Gospels give an account of the prisoner exchange the morning of Jesus’ crucifixion; Luke 23:13-25, John 18:40, Mark 15:6, and Matthew 27:15. The Jews now had a choice, who lives and who dies: Jesus or Barabbas. If you have any familiarity with the story of Jesus, you know he isn’t the one that goes free. The crowd chose Barabbas to go free. Who was Barabbas and why did they chose him over Jesus?

It is widely taught that the man that the Jews picked to live over Jesus was just a thieving murderous criminal thug. It’s often assumed, because of this, that Barabbas was hated and thus it showed how much more they hated Jesus. Here is what all four Gospels had to say about him:

At that time they had a well-known prisoner whose name was Barabbas.
Matthew 27:16

A man called Barabbas was in prison with the insurrectionists who had committed murder in the uprising.
Mark 15:7

Barabbas had been thrown into prison for an insurrection in the city, and for murder.
Luke 23:19

They shouted back, “No, not him! Give us Barabbas!” Now Barabbas had taken part in an uprising.
John 18:40

Some translations of John 18:40 call Barabbas a “bandit” or a “robber”. The Greek word used here is “lēstēs”. It has two definitions: robber, highwayman, bandit; or revolutionary, insurrectionist, guerrilla.1 This word doesn’t show up too many times in Scripture but it is also employed to describe the other two criminals that were crucified next to Jesus. The first century Jewish historian, Josephus, would always use this word when referring to violent revolutionaries.2 The two men crucified next to Jesus were most likely in Barabbas’ gang.

Barabbas wasn’t viewed as a thug. To the Jews, the choice that Pilate gave them was a no-brainer.

From all accounts placed together, Barabbas was a warrior, a revolutionary, an insurrectionist and a freedom fighter for the Jewish cause against Roman terrorist occupation. By law he was a murderer, but to the Jews, Barabbas was justified in killing Romans to protect God’s land from Rome. He didn’t kill fellow freedom-loving citizens, he was a terrorist killer. Barabbas was a hero. The crowd loved him. He represented a hope for freedom. 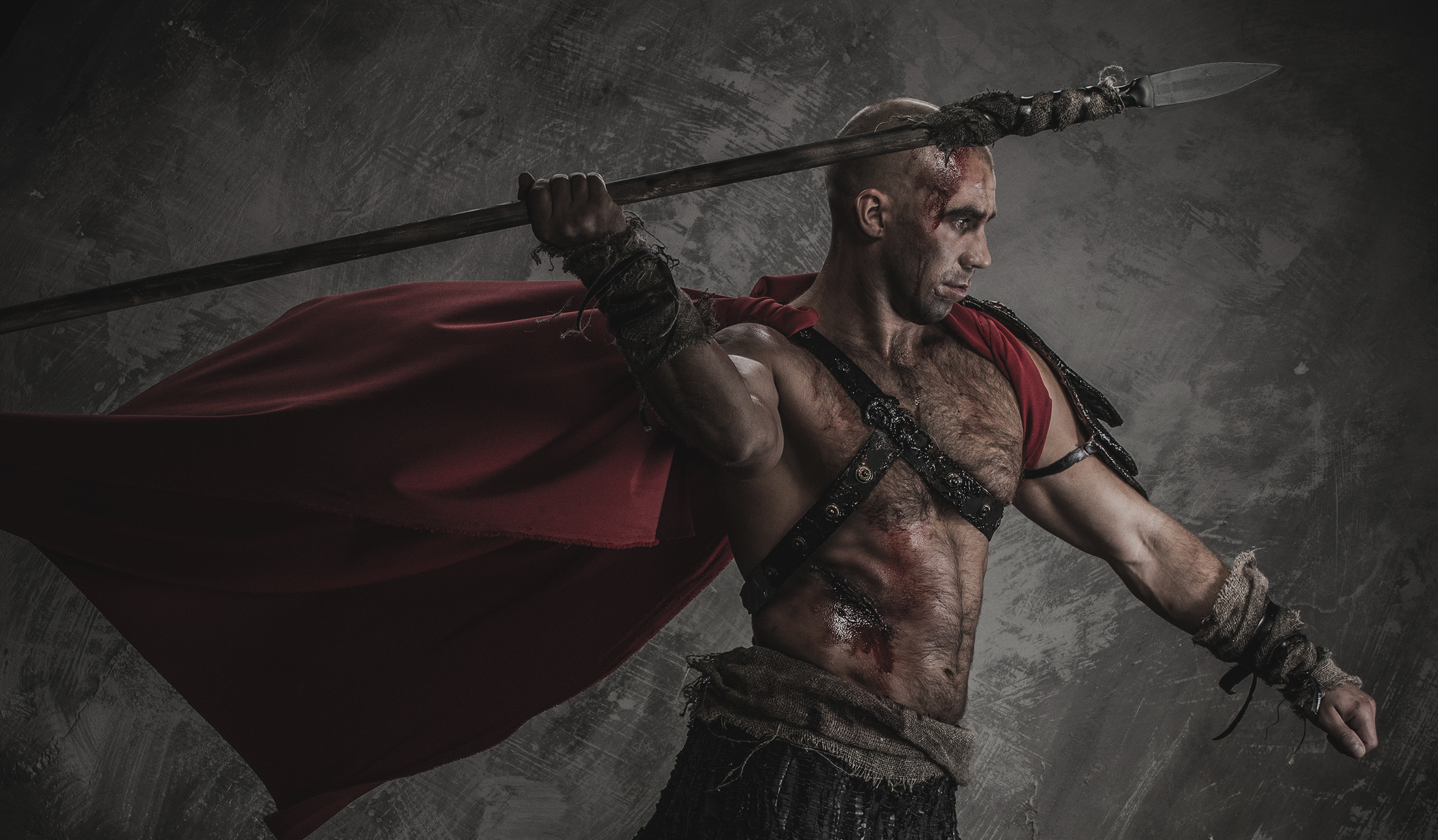 Hope in the Sword

Imagine again the scenario this article started with. This scene is basically the equivalent of terrorist occupiers arresting Americans for rising up and killing members of ISIS. Barabbas was a hero in the eyes of the Jews. Barabbas was a heroic freedom-fighter, willing to lead the people in a war of national independence. He had already killed a Roman sentry and represented the national hope of political freedom through violent revolution. He had guts. Barabbas looked a whole lot like the messiah that the Jews were waiting for.

In the eyes of the Jews, Jesus was a “false messiah” since he refused to lead the Jews to war against the Romans.

Jesus looked like a weak fool. Jesus looked like a coward. Jesus looked unpatriotic. Instead of fighting for freedom, Jesus demanded his followers die for their enemies, instead of killing them. Could Jesus have been any more unpatriotic? Imagine being told you had to love and die for ISIS rather than try to defeat them. To the Jews, the answer of who to set free and who to execute was a very clear answer. They shouted, “Set Barabbas free!” and “Crucify Jesus!”

When brought before Pilate, Jesus told him that the key difference between himself and other revolutionaries is that his followers do not fight (John 18:36). The Jews wanted a violent war hero who would kill the enemy to gain back their liberty and freedom. The Jews decided they would much rather have Barabbas and put Jesus to death. They thought Jesus was incapable of bringing them freedom. Every time we choose the way of violence, we make the same decision. We reject Jesus. We crucify him.

This is the significance of the choice between Jesus and Barabbas.

To the Jews, if Jesus was the Messiah then he must join them in their fight against the Roman occupation. In their eyes, he would be honored to have men like Barabbas in his army.

Instead of supporting a violent revolution against Rome, Jesus preached a revolution of peace and that they had to love their terrorist oppressors (Matthew 5:38-46, Luke 3:14, John 18:36). According to the accounts in the Gospel, when the leaders and their surrogates where given the choice between Jesus and Barabbas, they went around the crowd drumming up support for Barabbas. And it’s easy to see the propaganda against Jesus.

“Jesus is a loon! He has no concept of how to fight back against the Romans! As a matter of fact, Jesus insults our God by claiming his laws against the enemy have changed to love. Does he really understand that there is no respect toward our religion among the Romans? We must protect Israel! How does he expect us to fight back when they come into our towns and attack our children? Love them? That isn’t reality! We need Barabbas. It’s Barabbas who has fought for our cause. It’s Barabbas who has sacrificed so we can have freedom!”

This is no different than today. The country must be protected. The military must be honored to protect our freedom against the oppressors. If you suggest that the Church pray for, serve, and love ISIS instead of killing them, you’ll likely be called unpatriotic or a traitor.

Just like the Jews in Jesus’ time, a mixture of nationalism and religion is used to justify oneself against Jesus’ peace message.

“We must fight them with a strong military over there or they will come over here and destroy us over here. Islam is not a peaceful religion so we must combat it with our military! Peace through military strength. We want Barabbas!”

But, what about Christ, the Prince of Peace?

The Choice That Ends Nations

The Jews picked Jesus to die because he didn’t support what they wanted: to take Israel back for God… to “make Israel great again!” Barabbas, on the other hand, was a religious freedom fighter. He fought for freedom, for God and country. Sound familiar?

This story shows how the Jews chose violence over peace (the way of Satan over the way of Jesus). This story singles out patriotism as the catalyst for the sin of violence. Jesus prophesied that they would do this, and in doing so, bring their own complete destruction (Luke 19:41-44). Violence begets violence. This was the fork in the road for the Jews. This was their final chance to choose the peacemaking way of Jesus. They chose poorly. But can we blame them?

We often make the same choice.

If Barabbas was an American, we’d probably make a movie about him. His wife would get a book deal, telling the world how patriotic and brave he was. We might name a national holiday after him for standing up against the terrorists. He was the man that fought bravely for us all and when we wave the American flag, we do so in honor of him. All of our American common sensibilities say that Barabbas would be treated like a hero.

Barabbas was just like our military heroes who fight for God and country.

We can’t be very surprised at all that the people chose Barabbas over Jesus. We do the same with every bullet fired, bomb dropped, and flag waved, or every time we nod our heads in approval of someone else who does. We say our way is better than Christ’s way. We believe that violence is the answer. We believe the way of empire is better than the way of the Kingdom. But every time we think about Christ dying on a cross, we should be reminded that Jesus shamed that way of thinking.