God is often referred to as the Lion and the Lamb. Most people like the idea of God being a lion much more than God being a lamb. A lion is powerful, ferocious, and kingly. A lamb is a farm animal, and a baby farm animal at that; small, weak, and not very intimidating. Many would rather that God be a lion. A popular Christian song touts that “God’s not dead, He’s surely alive, He’s living on the inside, He’s roaring like a lion.” Most have heard someone say that “Jesus came the first time as a lamb, but he’s coming back the second time as a lion.” So is God a lion or a lamb, or both?

Obviously, God is not a lion or a lamb in the literal sense, but one or both of these animals can describe God’s character. We’re going to examine what the Bible has to say about each title in relation to describing God.

In the Old Testament, the word “lion” appears over 100 times, normally to talk about actual lions, but also as a metaphor. The metaphor of a lion is used to describe a great many things, including God. One time in the Old Testament God is described as roaring like a lion by the prophet Hosea (11:10). He describes God as roaring to call his people to Israel from the west, from Egypt, and from Assyria. Later, as Hosea recounts Israel’s oppression by foreign powers, he describes God poetically, as a leopard, a lion, and a bear (although historical context attributes the ascribed destruction to Assyrian armies).

A “roaring lion” is a term also often used to describe wicked rulers who lord over helpless people (Proverbs 28:15). When the Old Testament prophet Zephaniah describes a Jerusalem who has turned away from God to worship pagan gods, he describes them as oppressors who roar like lions (Zephaniah 3:1-3). After centuries of rebellion against God, Ezekiel describes a deeply wicked Israel as a roaring lion (Ezekiel 22:24-29) who has been ensnared by Babylon and can roar no more.

Lambs in the Old Testament held great significance because their blood was used to save the Israelites from “the destroyer” in Egypt. Because of this, lambs were continually sacrificed by the priests for the sins of Israel. The prophet Isaiah described a future messiah that would be like a lamb (Isaiah 53:7). So is God a Lion or a Lamb? Maybe the New Testament can help.

When we fast forward to the New Testament, where God’s complete character is revealed in Jesus, we get a different story:

No one has ever seen God, but the one and only Son, who is himself God and is in closest relationship with the Father, has made him known.
John 1:18

“Look, the Lamb of God, who takes away the sin of the world!”

Be alert and of sober mind. Your enemy the devil prowls around like a roaring lion looking for someone to devour.
1 Peter 5:8

So to review: lions are used to describe wicked rulers, evil, rebellious Israel, and the devil himself. In the New Testament, God is never described as a lion. The same author who described the devil as a roaring lion also described Jesus in the same book:

For you know that it was not with perishable things such as silver or gold that you were redeemed from the empty way of life handed down to you from your ancestors, but with the precious blood of Christ, a lamb without blemish or defect.
1 Peter 1:18-19

Peter chooses to describe Jesus as a lamb and describe the devil as a lion. So, where does this whole God is a lion thing come from then? 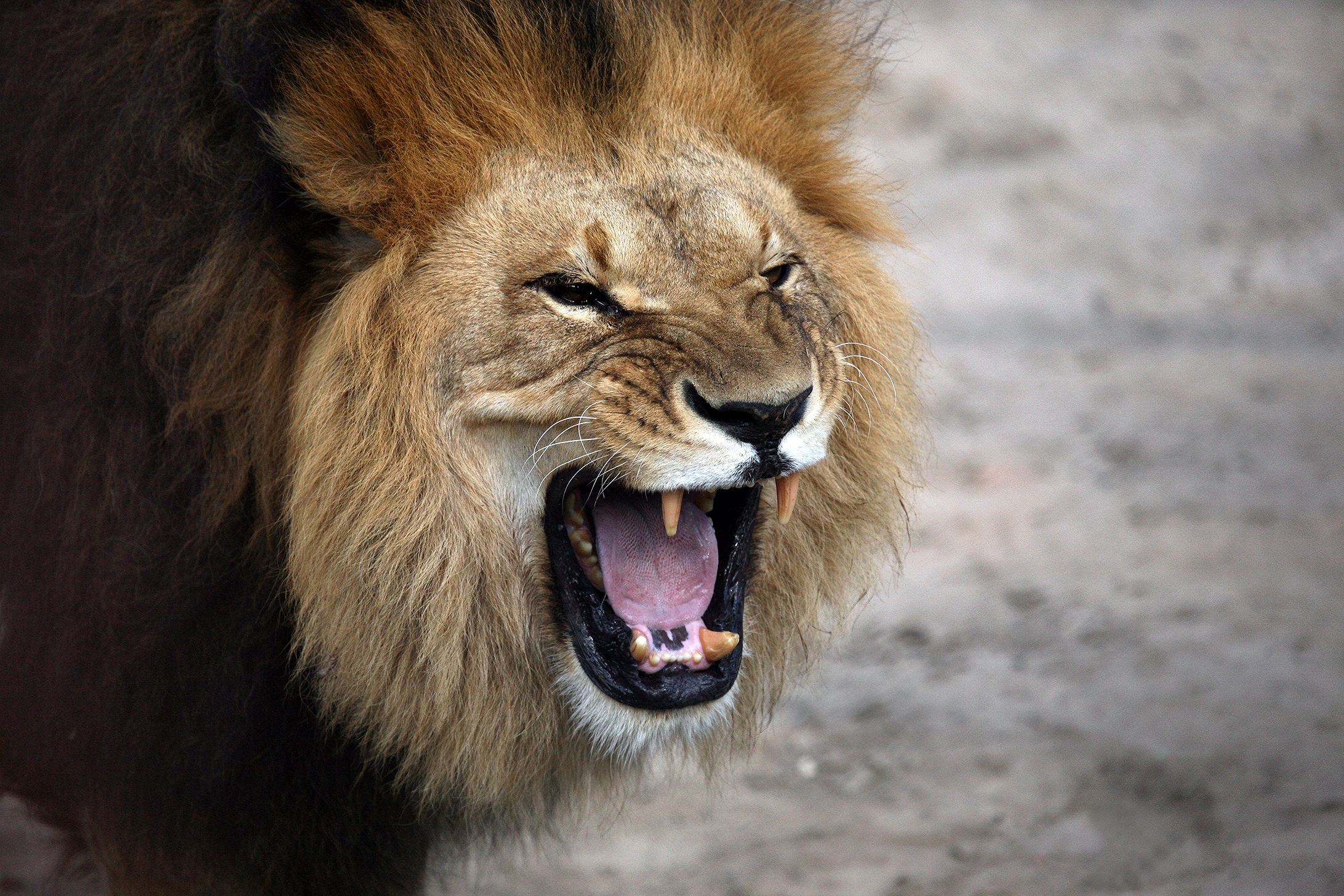 The Lion of Judah

The Lion was a well-known Jewish image for the Messiah, the one who would come as a conquering king. This prophecy comes all the way back from the book of Genesis. In chapter 49, Jacob blesses all twelve of his sons, who would each become one of the twelve tribes of Israel. He attributes a variety of objects or animals to each of his sons, including a donkey, snake, doe, and a wolf. To Judah, he says he is a lion, evoking royal imagery. Jacob says that “the scepter will not depart from Judah… until he to whom it belongs shall come and the obedience of the nations shall be his” prophesying a time when one of Judah’s descendants will be king over the whole Earth. Because of Jacob’s choices in blessing his children, the Lion of Judah became a title for the Messiah who would save the world.

Interestingly, the title “Lion of Judah” is only mentioned once in scripture, and it is in a passage that refutes it. In the book of Revelation, a great vision of symbolic imagery is described, we read about a mighty angel proclaiming in a loud voice, “Who is worthy to break the seals and open the scroll?” But no one in heaven or on earth or under the earth could open the scroll or even look inside it (Revelation 5:2-3). The secret plans for the world’s final redemption can only be opened by one who is worthy. In the vision, an elder says, “Look! The Lion of the tribe of Judah, the Root of David, has triumphed. He is able to open the scroll!” This image brings to mind the violent, militaristic, triumphant image of a Messiah who would defeat enemies by ripping them apart. This is exactly what the oppressed Jews were waiting for.

But when we look we don’t see a lion at all, we see a slain Lamb.

The author of Revelation doesn’t turn to see a lion, he sees a slain Lamb (Revelation 5:5-6). That’s right, no lion; he turns and sees a Lamb “looking as if it had been slain.” There was no lion to be found—just like there was no violent messiah sent by God to be found. By identifying the lion as actually being a slain Lamb, John has transformed a “symbol of power and domination” into a “symbol of vulnerability and nonviolence.” The shock of this reversal discloses the central mystery of Revelation: God overcomes the world not through a show of force but through the suffering and death of Jesus.

The Messiah that the Jews longed for turned out to be Jesus, but because Jesus didn’t line up with the Jew’s idea of what they believed conquering power should look like, they rejected him. They wanted a violent warrior king, but instead, they got a king of non-violence. In the book of Revelation, it’s this little slaughtered lamb that prevails over the beasts of empire. It’s absurd, funny, beautiful, and true.

Through this vision in Revelation, God rejects the title he had been given.

In the book of Revelation, after Jesus is revealed to be the Lamb instead of the Lion, the author refers to Jesus as a Lamb 27 more times. For the rest of the book, it is the slain Lamb, never the lion, who does all the fighting. By identifying the expectation of a lion as a slain Lamb, John has transformed a “symbol of power and domination” into a “symbol of vulnerability and nonviolence.” 1 If you read this book carefully, you’ll see he always “fights” in a slain-Lamb-like way, triumphing through vulnerability and nonviolence.

Revelation is illustrating mankind’s flawed expectations of what God is like. All ancient people thought God was a violent warrior but the revelation of Jesus shows us that the opposite is true. Revelation shows us that God was always the lamb, we just didn’t always know it.

Jesus as the Lamb

Jesus being a Lamb holds great significance. The lamb was highly symbolic of the Passover lamb. The blood of the lamb symbolized the way the Israelites were spared in Egypt. So to say that Jesus is the Lamb of God conveys that he is the ultimate sacrifice that saves. But beyond this Hebrew symbolism, God is described as a Lamb because of how nonviolent they are.

Lions, on the other hand, were symbols of violent power, conquest, destruction, and death. Lions are predators. Wicked kings who ruled with the violent power of Satan were described as lions. Daniel was saved from a den of lions. Peter describes the devil as a lion. Emperor Nero of Rome fed Christians to lions.

When we finally see God we don’t see a lion, we see a lamb. It turns out, God isn’t the lion and the lamb, he is the lamb vs. the lion.

The consistent witness of the New Testament is that the exalted Lord remains the crucified Jesus (John 20:26-29; Galatians 2:19-20). When this truth is neglected or forgotten, trouble follows swiftly. Any theology or reading of Revelation that forgets the truth that Jesus is the slain Lamb is doomed, not due to failure, but to success—which is ironically its inherent defect. Human beings, even apparently faithful Christians, too often want an almighty deity who will rule the world with coercive violent power to execute retributive justice. This trap causes us to mistakenly side with the Lion-like way of Babylon instead of the Lamb-like way of God’s Kingdom. Jesus being a Lamb instead of a Lion is the perfect imagery for the mind-blowing revelation of his mission we see in the Gospels. It’s the scandal of the Gospel! Jesus Christ wasn’t the warrior god that the Jews were expecting; he didn’t look like a lion. When given the choice on Good Friday, they preferred the violent zealot Barabbas; at least he looked more like the Messiah they had hoped for. How often are we guilty of the same thing?

We must accept that the Lamb has truly won the victory when he was slaughtered. We can’t think that there is saving power in the blood of the Lamb in Jesus’ crucifixion, but not quite enough saving power. If we think we need Christ to come back again with some real power, not as a Lamb, but as a roaring Lion, we’ve missed the entire point of the book of Revelation, and we’ve certainly misunderstood the Gospel.