God has been putting up with us and our sin for a very, very long time. One massive overarching theme that we can see in Scripture is that God has been slowly moving his people further away from sin and closer towards his ideal. In the New Testament, we see a massive jump forward with the arrival of Jesus. God came to us in the flesh to say, “enough is enough.” No more misinterpretations, no more accommodations, no more concessions.

In this first article of a series called “Enough is Enough,” we’ll be looking at animal sacrifice in the Old Testament and how God never wanted it in the first place.

The ancient Israelites had a barbaric and bizarre practice of killing animals and then burning their dead bodies. While many assume that God wanted animal sacrifices, a closer look at scripture reveals otherwise.

All Ancient Near Eastern people, not just the Israelites, sacrificed animals to appease the gods. Animal sacrificed was practiced long before the Hebrews were even a people, much less had written the Scriptures. In light of the almost universal religious practice of sacrificing animals, it seems reasonable to assume that the Israelites had been sacrificing animals a long time before God ever began instructing them. In fact, the way some Old Testament authors refer to the sacrifice as producing “a pleasing aroma to God” reflects the cultural indebtedness of this practice, for we find this same phrase used by other people long before the Israelites (Exodus 29:25, 41; Leviticus 1:9, 13, 17).

Some claim that animal sacrifice has been a staple of human religion around the world from the start because of two stories in Genesis. The first is when Adam and Eve sinned and were expelled from the Garden of Eden, God made them animal skin clothes (Genesis 3:21). It is sometimes taught that God wanted to show Adam and Eve that there were consequences because of their sin, so he sacrificed an animal in front of them and used its skin to make clothes. Some even go as far as claiming this is an illustration that points to Penal Substitution Atonement Theory, saying that God should have killed them but killed an animal in their place.

All of this is a major stretch, though, because none of it is mentioned. All that the Scripture says is, “The Lord God made garments of skin for Adam and his wife and clothed them.” The death of an animal and sacrifice are never mentioned. God simply made “garments of skin,” and he could have in the same way he made Adam and Eve and the world—out of nothing. So we shouldn’t read this story as proof that God invented animal sacrifice.

For in the day that I brought them out of the land of Egypt, I did not speak to your fathers or command them concerning burnt offerings and sacrifices. But this command I gave them: ‘Obey my voice, and I will be your God, and you shall be my people. And walk in all the way that I command you, that it may be well with you.’
Jeremiah 7:22-23

As we read in Genesis, chapter 4 tells us about something Adam and Eve’s children do to appease God. Cain and Abel each make an offering to God (Genesis 4:3-5). Interestingly enough, there’s no suggestion that God asked Cain and/or Able to offer anything. They just started doing this. Some have suggested that this reflects the fallen human sense that we are estranged from God and that he’s angry about it, so we instinctively want to do something to rectify this.

This story in Genesis makes absolutely no mention of commonly concluded claims: the killing of an animal or the sacrifice of an animal. Reread the story; there is no mention of sacrifice—only of offerings. Offerings were also ubiquitous in the ancient world. The common thought was that gods need to eat too, and so food offerings are made to feed them. Cain offered God fruit to eat, and Abel offered God “fat portions” to eat.

Remember, no mention of sacrificing an animal is made in Genesis 4, so the offering that Abel made was not a dead animal but rather a part of an animal to eat. Abel was offering God the “fat portions” of the firstborn of his flock. So Abel could have killed his animals for food and offered God the best part to eat, but there is another interpretation as well. The Hebrew word translated into “fat” shares the same consonant configuration for the word that gets translated into “milk.” Some early Jewish and Christian scholars understood this text to say that Abel offered milk to God. The Jewish historian Josephus is one such source, who wrote that “Cain brought the fruits of the earth, and of his husbandry; but Abel brought milk and the first-fruits of his flocks” (Antiquities 1.2.1).

Either way, no mention of sacrifice is made in the story of Cain and Abel.

Most are familiar with the story of Abraham and Issac. God tells Abraham to go up a mountain and sacrifice his son, but at the last minute, he stops him (Genesis 22). Most read this story as God testing Abraham’s faith, but it is actually much more than just that. If you look closely, you can notice some interesting things about the story.

In Genesis 22:2-3, God says, “go kill your only son that you love,” and Abraham just sets out and doesn’t even question it. There isn’t a hint of Abraham being resistant to this idea. He lies to his son to keep him calm but doesn’t hesitate to tie up Issac and raise up his blade. Right before Abraham slaughters his child, an angel stops him and says, “Do not do anything to him. Now I know that you fear God, because you have not withheld from me your son, your only son.” (Genesis 22:12)

Without knowing the context of Abraham’s world, it is easy to overlook the most important lesson this story teaches us. In the time Abraham lived, there wasn’t a pagan god in the land that didn’t demand child sacrifice. Human sacrifice was commonplace, and the gods demanded firstborn children most often.

When Abraham heard God tell him to go sacrifice his son, this was no surprise. He expected it. But instead, God stays his hand. That is the story’s whole point: God is putting an end to the ritual of child sacrifice (Leviticus 18:21, 20:3; Deuteronomy 12:30-31, 18:10). Human sacrifice was the norm worldwide, but God was revealing that he is different from other gods. This was God’s first step in taking humankind away from sacrifices: moving from human to at least animal. 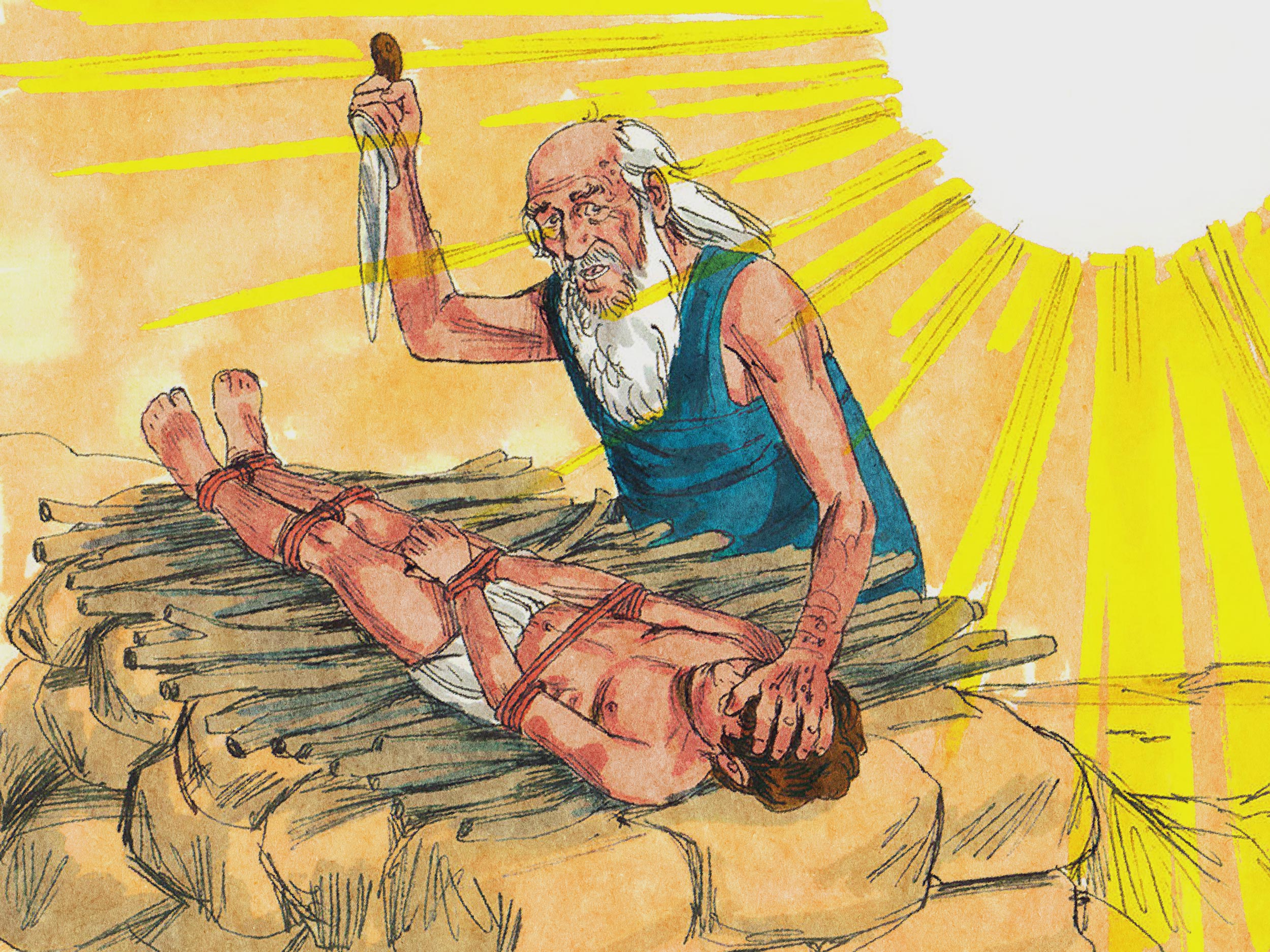 Since God must relate to people where they are in order to gradually lead them forward, just as a missionary must do when going to pagan cultures, it seems that God accepted this barbaric practice as an accommodation to his fallen, culturally conditioned people. In fact, one passage in Leviticus indicates that God commanded animal sacrifices as a way of helping his people to stop worshiping demons (Leviticus 17:7).

So while God accepted this practice, he changed its meaning. Instead of being used to appease God’s wrath, as pagans have always believed, these sacrifices were used to remind people that covenant-breaking with the God of life inevitably leads to death. Thus, animals were sacrificed not because God needed them to forgive people but because his people needed them to remember the death consequences of sin and to therefore repent when they’d broken covenant with God.

Origen, a 3rd-century theologian, put it this way:

Since the Jews loved sacrifices, being accustomed to them in Egypt, as the golden calf in the desert gives witness, God permits them to offer them to himself so as to curb their disordered tendency to polytheism and to turn them away from sacrificing to idols.1

Like other Christian thinkers of the time, Origen did not believe that animal sacrifices were God’s idea. However, the Jews were already steeped in this ancient barbaric practice, and God saw that it was pulling them in the direction of pagan polytheistic idolatry. God thus choose the lesser of two evils when he decided to block the pull toward polytheistic idolatry by stooping to allow the Jews to make their sacrifices to him.

Later in Israel’s history, when people began sacrificing animals without repenting in their hearts, the Lord told them (through prophets like Isaiah, Hosea, and Amos) that he despised their sacrifices, for they are meaningless without a change in heart (Psalm 51:16-17; Isaiah 1:11-14; Micah 6:6-8: Amos 5:21-25; Hosea 6:6). Even Jesus quotes Hosea when speaking to the Pharisees, saying, “I desire mercy, not sacrifice” (Matthew 9:13).

The law is only a shadow of the good things that are coming—not the realities themselves… …those sacrifices are an annual reminder of sins. It is impossible for the blood of bulls and goats to take away sins. Therefore, when Christ came into the world, he said: “Sacrifice and offering you did not desire… with burnt offerings and sin offerings you were not pleased.” …we have been made holy through the sacrifice of the body of Jesus Christ once for all.
Hebrews 10:1, 3-6, 10

In Hebrews 10:1-14, we are told that animal sacrifices were a reminder of sins but could never take the sins away. No matter how many times the Israelites killed animals, their sins were never taken away. “Sacrifices and offerings, burnt offerings and sin offerings you did not desire, nor were you pleased with them” (Hebrews 10:8). Jesus came to do away with sacrifices by becoming the final sacrifice, the first and only sacrifice that could actually set things right.

It is clear that once Jesus arrives, the sacrificial system that God had been accommodating is done away with.

On this side of Jesus, Christians don’t sacrifice animals. We don’t do it. We don’t because it’s been revealed to us that God never desired it, and Jesus is the only sacrifice that humankind would ever need. God never wanted animal sacrifices. He used them for a time, but now with Jesus, they are done away with once and for all. Enough is enough.