As a historical event, World War 2 is idolized, propagandized, and fetishized more than any other war. It is proposed to be the ultimate showdown of ‘good vs evil’ in modern history. There was no group more evil than the Nazis while there was no group more heroic than the allied forces. More movies, shows, books, video games, and toys have been made about World War 2 than any other world event. Nazis are the archetypical ‘bad guy’ in all of pop-culture. Today, while the war is perceived oversimplistically, in reality, it wasn’t so black and white. Over 150 American corporations collaborated, funded, and profited from the Nazi party—from Ford to Chase Bank to Coca-cola. But what really made World War 2 possible were all the soldiers who were willing to follow orders and kill for their country.

The term “Christian” means “Christ-like.” It was a name first given to followers of the way of Jesus in the first century. For the first three hundred years after Jesus, Christians rejected all forms of violence and refused to serve in either the government or the military. The Christian devotion to the way of Jesus mostly ended when the Roman empire co-opted the movement in the fourth century. No longer did people decide to become a follower of Jesus, now they were born into the religion of Christendom. Where once Christians would worship and follow Jesus, now Christians just worshipped him. State-sponsored religious leaders took the Christ-following out of Christianity. This departure would change the face of Christianity for centuries to come.

Ever since the Reformation in the 16th century, Christianity has struggled to re-emerge from Christendom and re-take on the mantle of Christ-follower. While small sects of Christians would re-adopt the teachings and example of Jesus, the majority of Christianity still ignored them. Because they refused to allow their faith to be fused with their pagan citizenship, these small sects of Christ-followers were hunted and killed by the Catholic and Protestant Christians of the time. Mainstream Christianity continued to kill others in the name of their countries for centuries to come. While today, Christendom is limping on its last leg in America, the majority of the Christian world is rediscovering what it is like to follow Jesus. This certainly wasn’t the case in the 1940s.

For God and Country

During the time of World War 2, Germany’s Christians comprised anywhere from 94% to 98% of the total population. The percentage of the American population that was Christian was a little lower, at around 91%. Religious statistics for the military populations of each country showed the same percentages. At least 9 out of 10 German and American soldiers identified as Christians. How on earth could Christians be manipulated into killing each other?

For as evil as Hitler was, he didn’t kill a single person. Instead, he convinced millions of Christians to kill for him. Around twenty million soldiers died in World War 2; over 90% of those soldiers were Christians. These Christian soldiers caused many more deaths than their own. Around 45 million civilians died in World War 2. Because Christians were willing to don the military uniform and pick up a gun, more people were killed than any war before it or since. What would have happened if Christians didn’t put down their cross and pick up the sword?

There are two lies that caused World War 2. The first lie was that involvement in government and military was compatible with Christianity. This lie wormed its way into Christianity in the fourth century, but it was still present during World War 2. This lie allowed Christian Germans to put on a military uniform, pick up a gun, and aim it at American Christians. What was an American Christian to do when faced with this threat? The second lie was that the correct solution to combating violence was more violence. American Christians put on a military uniform, picked up a gun, and aimed them at German Christians. This is the “violence begets violence” that Jesus warned his followers about—but remember, these Christians clearly weren’t followers of Jesus.

When Christianity is reduced to a religion that is more about the Bible than it is about following Jesus, its adherents can be made to follow Joshua rather than Jesus. Joshua led war campaigns and mercilessly slaughtered his enemies. Jesus commanded total nonviolence and self-sacrificial love for one’s enemies. You can’t do both. When you read the Bible as a flat text where all verses carry the same authority, you are left with a book that can be used to support anything. The Bible supported the slavery African people. The Bible supported the genocide of Native Americans. The Bible supported the slaughter of German and American Christians. But only if you remove the teachings and example of Jesus. 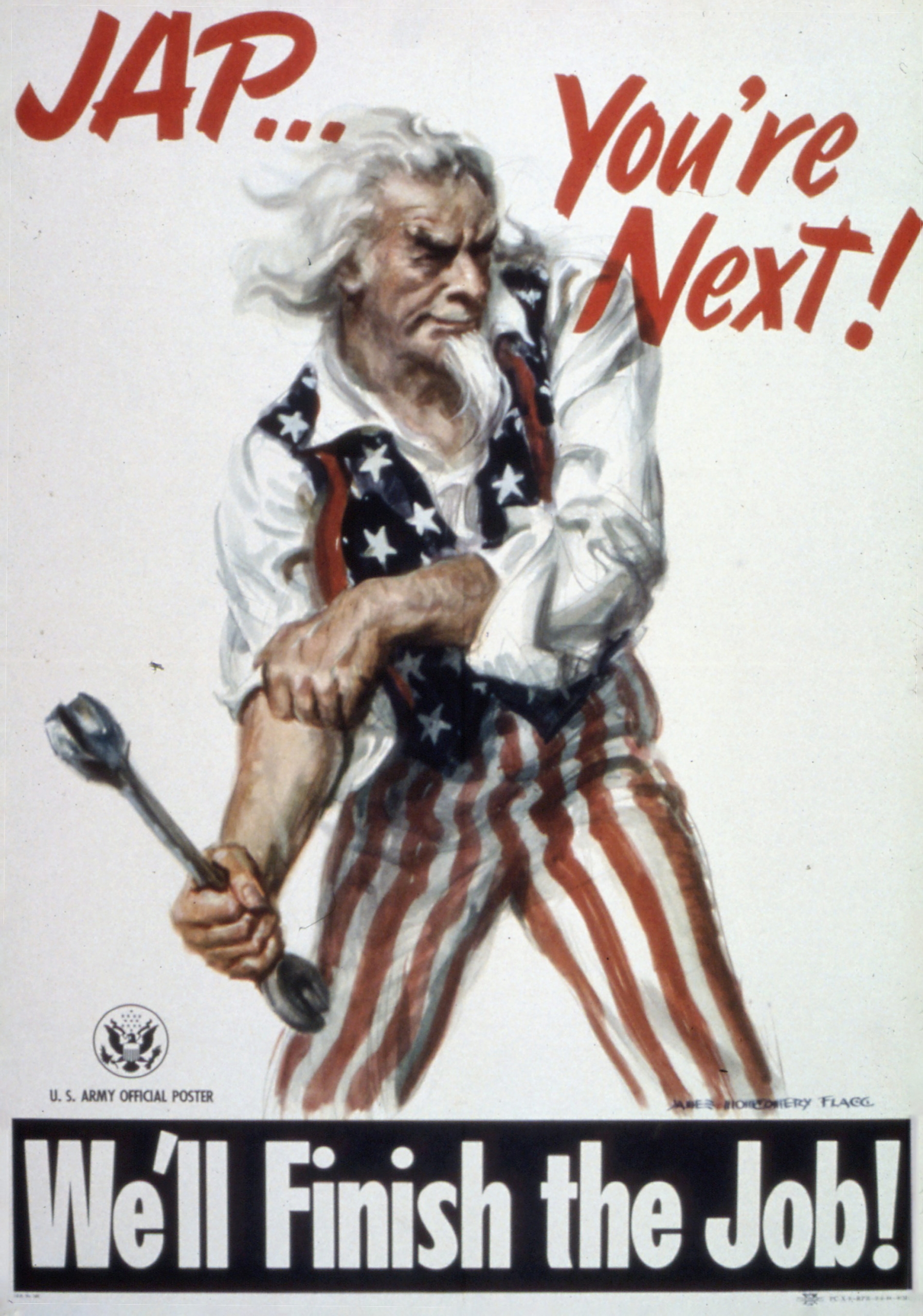 The Heights of Hypocrisy

While Christians were killing Christians in Europe, Christians were also killing Christians in Japan. August 6th, 1945 was the first time in human history that an atomic bomb was dropped with the intention of killing human beings. In an instant, thousands of innocent men, women, children, and infants were vaporized. Those were the lucky ones. Thousands had their flesh ripped from their bones where they stood. Many more thousands were set on fire from the blast and burned alive. Thousands were crushed to death by falling buildings. The devastation was unimaginable. The act was truly and utterly satanic.

A few days later, a Christian man named Charles Sweeney, along with his all-Christian crew were flying another plane over the Japanese city of Nagasaki. Despite 250 years of harsh persecution of Christians in Japan’s past, Nagasaki had become the place of the largest concentration of Christians in all of Japan. The city was home to Urakami Cathedral, with 12,000 baptized members, and was the largest church building in all of East Asia. The church was so large that it was one of the few identifiable landmarks that could be seen from 31,000 feet up in the air. It was this church that Charles Sweeny and his Christian bomber crew targeted with the second and last atomic bomb ever to be dropped on human beings.

Thousands of Christians were attending service that morning at the cathedral. They, along with 70,000 other civilians, were all killed. 8,500 church members who weren’t killed in the blast would die soon after from radiation sickness. What the Japanese government could not do in 250 years of lethal persecution was done by American Christians in mere moments. Christianity has never recovered in Japan since that day of mass murder.

In the 3rd century, Christians wouldn’t dream of fighting in the military. By the 5th century, Christians fighting in the military was commonplace. Where once Christians were hunted and killed by the Roman military, they were now joining the military and killing others. When the teachings and example of Jesus Christ are taken out of Christianity you are left with a religion that can be manipulated into virtually anything. History has shown us time and time again that Christianity, without Jesus, can be manipulated into a religion that has no problem with slaughtering other people made in God’s image. From the genocide of the Native American people to the World Wars, when Jesus is placed behind Moses and Joshua, no one is safe.

World War 2 wasn’t made possible because of Muslims or godless atheists. World War 2 happened because of Christians. The war was waged because Christians were not following Jesus. If all those Christians had been following Jesus, they would have resembled the early Church who did. They would have recognized that their true citizenship was in Christ’s nation, not a nation of the world. They would have refused to pick up a gun and point it at another fellow human being. Instead, they ignored the teachings and examples of Jesus and killed each other by the millions. Millions of Christians killing millions of Christians. This was perhaps the epitome of Satan’s achievements.

Jesus abolished war but he is a loving God who won’t force our hands. We have to willingly step into his Kingdom of nonviolence and choose to love others instead of killing them. Wars will only end when Christians start following Jesus, the Prince of Peace, instead of the Caesars of their day.