Hell Isn’t Forever Why the tradition of eternal torment is a myth.

If the idea of eternal conscious torment in hell doesn’t sit right with you, there is a reason; you were created to instinctively know that eternal torture is pure evil. We could imagine that Satan would keep a place like hell up and running for all eternity, but would God? Certainly not. Yet despite Scripture clearly teaching that hell does not last forever, after the 6th century the majority of church tradition has taught that it does. Let’s ignore tradition for the moment and look at what the early Church taught and what Scripture actually says.

Where in Scripture is Hell?

You may be surprised to learn how many times the term “hell” shows up in the Bible. There just simply wasn’t a word for hell in the original Hebrew, so there is absolutely no mention of it in the Old Testament.

Hell isn’t mentioned even one time in the Old Testament.

The Hebrew prophets never once mentioned a place where human beings would writhe in eternal torment, gnashing their teeth forever. Nor did the Hebrew prophets ever mention even the possibility of suffering after death. Isn’t that extremely odd, if there really is an eternal hell and God wanted us to know how to avoid it? For thousands of years, silence.

In the New Testament, a word that could be translated into “hell” is only mentioned one time in 2 Peter 2:4. The word is “Tartarus” which comes from Greek mythology, a temporary holding place where the wicked await judgement. So, the one place in all of Scripture where a word could be translated into hell isn’t even eternal and is only referenced to describe where demons are sent, not humans.

The word “hell” didn’t even exist until around 700 years after the time of Jesus. According to the The Barnhart Concise Dictionary of Etymology, the word “hell” was adopted into our vocabulary as a way to introduce the pagan concept of hell into Christian theology– which it did so quite successfully.

But isn’t the word hell all over the Bible? Well, yes and no. In the Bible a few words get translated into the English word “hell”.

While only the King James Version of the Bible translates all four of these words to “hell”, almost all other translations use “hell” only when referring to “Gehenna”. The western pop-culture idea of “hell” wasn’t something that Jesus ever talked about. Instead, in the Gospels, Jesus uses the word Gehenna 11 times to describe the opposite to life in the Kingdom. Gehenna was a real place just outside the city walls of Jerusalem. It was a garbage dump that was continuously burning. Christ’s listeners would understand his metaphor for what life was like outside the Kingdom of God.

In all of Scripture, Judgement is mentioned 344 times, Sin is mentioned 441 times, and Death is mentioned 456 times, and yet we only see Hell mentioned 14 times, even though the actual word is Gehenna. If hell is the natural consequence of sin, one must wonder why sin and death have near-equal appearances, but sin and hell have such a striking imbalance.

When we read the story of the early church in Acts we find them spreading the good news of Jesus– but they never warn anyone about hell. Judgement? Yes. But hell? No.

Jesus used the metaphor of Gehenna because it would bring to mind total destruction. Bodies heaped onto the fire would be burned up and be completely destroyed. This total annihilation is how almost all verses in the Bible describe the fate of those not in the Kingdom of God.

For God so loved the world that he gave his one and only Son, that whoever believes in him shall not perish [apollymi] but have eternal life.
John 3:16

This well known verse showcases a dichotomy that appears all over scripture: repent or perish. “Perish” is translated from the Greek word “apollymi” which means “to destroy”. Apollymi is also sometimes just translated into English as “destroy”. 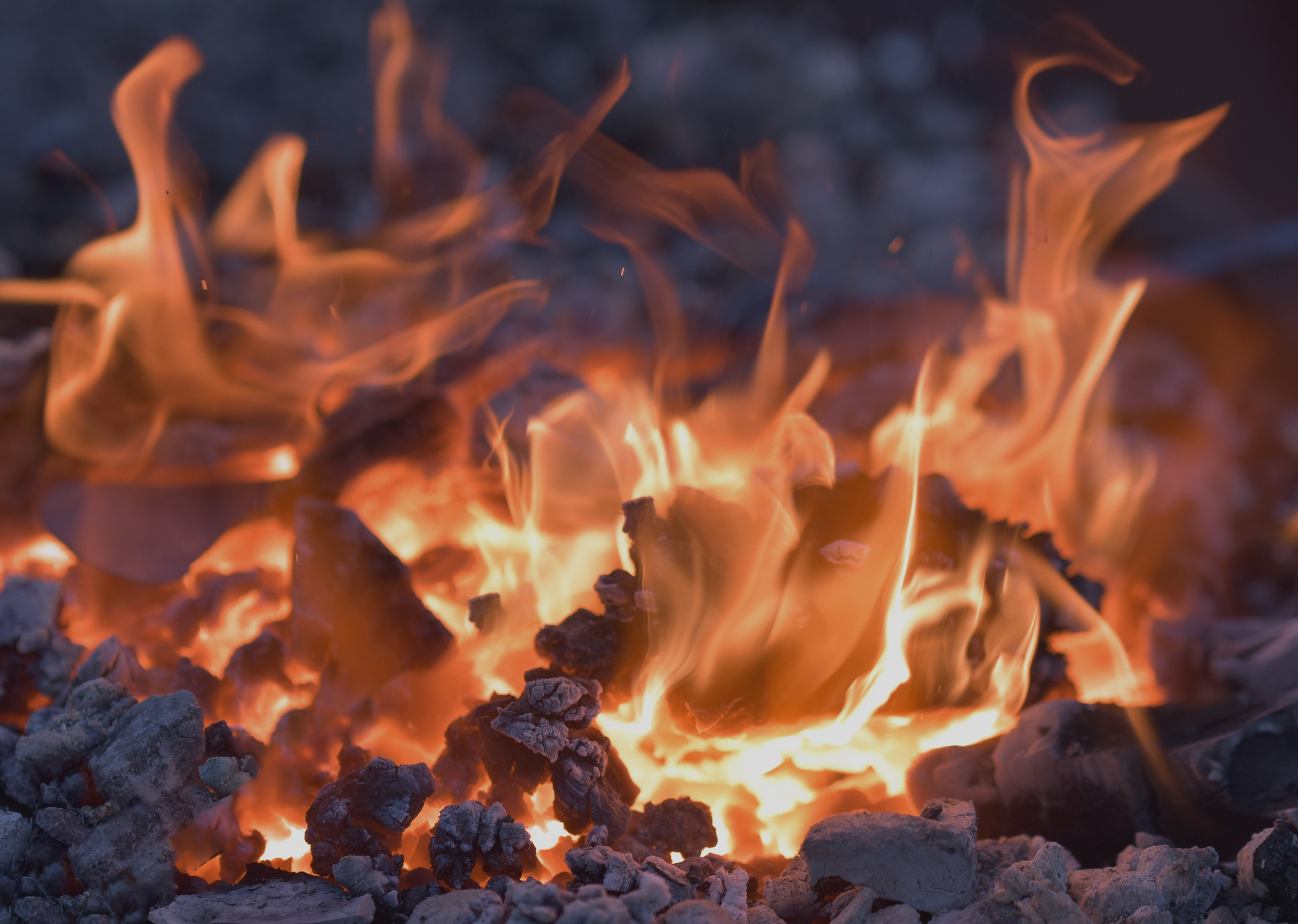 My sheep listen to my voice; I know them, and they follow me. I give them eternal life, and they shall never perish [be destroyed (apollymi)]; no one will snatch them out of my hand.
John 10:27-28

We have to wonder why Jesus made such a promise that his sheep would never perish since there is no possibility of anyone ever perishing. We’d have to wonder why he didn’t say, “I give eternal life in heaven to them, and they will never suffer eternal torment in hell.” The answer becomes very clear if we look at these verses from a Hebrew perspective instead of a pagan Greek perspective (everyone has an immortal soul).

Scripture claims that only God is immortal.

God, the King of kings and Lord of lords, who alone is immortal and who lives in unapproachable light. To him be honor and might forever.
1 Timothy 6:15-16

The ability to stay alive forever is not something we as humans have the ability to do. We do not have “souls” that are immortal. We are simply incapable of staying alive forever to be tormented in hell. God offers immortality only as a gift to people who align themselves with his will. Jesus called this “the gift of eternal life”.

For the wages of sin is death, but the gift of God is eternal life in Jesus Christ.
Romans 6:23

We are told at least 40 times in the New Testament that “eternal life” is the reward for the righteous.1 So it is certainly safe to say that the unrighteous will not receive eternal life, and nowhere in the Bible does it say that they do.

Does God get what God wants? Is God victorious over evil in the end? The traditional view of eternal torment in hell seems to answer, “no, he’s not victorious over death and evil in the end.” The victory of Jesus is final but it cannot reach its goal until evil is abolished. If hell is eternal conscious torment, than clearly “some” of God’s creation is still infected by the reign of sin and rebellion, and ultimately God fails.

Christ came as a result of the fall and introduction of evil into creation. The chief purpose of his life, death, and resurrection “was to destroy the works of the devil” (1 John 3:8). In order for Christ to truly be victorious over evil, (everything that is evil), at some point it must cease to exist. However, if the traditional view of hell is correct, evil doesn’t cease to exist at all, but continues on and on for all of eternity. In the traditional view of hell, Christ is not the victor—he simply contains evil—allowing it to continue in some corner of God’s new creation.

While the concept of Eternal Conscious Torment was nowhere to be found in the Old Testament, it did start to materialize in some Jewish thought by the time Jesus came on the scene. The Pharisees believe in an afterlife of hellish torture but where did they get that idea if not from the Hebrew scriptures?

During the 400 year span of time between the writing of the Old Testament and the New Testament some Jewish rabbis began compiling materials that would one day come to be known as the Babylonian Talmud. Many of the thoughts, beliefs, and ideas from the Talmud came from their Greek and Egyptian neighbors. Christians reject these writings and beliefs as pagan -which they are- yet one major belief is with us today… the belief of an eternal torturous afterlife.

For the first 500 years of Christianity the idea of eternal conscious torment was a view, but it was the minority view.2 The two other views held were Annihilationism (Conditional Immortality) and Universal Reconciliation with the latter being the majority view.3 The idea that Hell is eternal torture only became popular once Rome had taken over the religion of Christianity and needed to utilize fear in order to control people.4

The State of Eternity

The traditional concept of an eternal hell as a place of torment isn’t anywhere to be found in Scripture. The word “heaven” appears over 600 times in the Bible. A word that actually could be translated to “hell” appears only once in the Bible, and that hell (Tartarus) is for fallen angels awaiting judgment and thus is not for human beings and is not “eternal”.

Humans also could not survive in an eternal hell because humans do not innately possess eternal life. Eternal life is something that is only given to disciples of Jesus. The promise repeated in Scripture for those not in Christ is destruction and death, not eternal torture.

The concept of an eternal hell strips God of his ultimate victory— victory over evil.

The Bible clearly teaches there are consequences for sin and that there will be a coming judgement for those not in the Kingdom of God. That judgement is likely painful and definitely eternal in consequence, but not eternal in duration. Scripture simply doesn’t teach the pagan concept of an eternal hell.